Training OverlapSegmentationNet with gpu acceleration on a Ubuntu powered laptop.

It is  supposed that a fresh ubuntu 16.04 is set-up.
Install Nvidia proprietary driver from the system parametres menu:

The NVidia installed files, with synaptic package manager, are:

Nvidia acceleration can be switched on graphically after having installed nvidia-settings :

Check driver installation from a terminal by starting glxgears:

When NVIDIA mode is selected, glxgears performances should increase.

CUDA8 was installed from a .deb file available from nvidia's site: 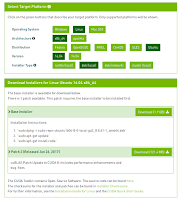 Check cuda installation using the "./deviceQuerry" method (see the end of the post).

The Cudnn 5.1 library was installed by copying the files at the right places (Installing cudnn 6 from .deb archive wasn't a good idea. )

There's different ways to install tensorflow. Here, both tensorflow with gpu support and keras were installed  in a virtual environnement with pip.

h5py was installed from pip too.
Don't forget at the end from a terminal to :

OverlapSegmentationNet is an implementation of UNet by Dr Hu .

The first version of the low resolution dataset was used. Download it and move it into the code directory:

The code will generate the two files highlighted in green above.

Switch into gpu mode with (then logout / login):

Activate the proper virtual environnement. Mine was called tfgpu, so for my computer, it is:

Edit the code to set-up the desired number of epoch
From a terminal, run trainModel.py. For example in my computer, it is:

If the gpu is properly used by tensorflow the terminal should yield something like:

The usage of the gpu is mentionned, furthermore the cpu usage is not stucked on 100%.